Bird Key viewed from the JFK Causeway drawbridge with downtown and the Port of Miami in the distance. (Photo by Terence Cantarella)

There’s an uninhabited island in Biscayne Bay where a dozen species of birds whoop loudly in the treetops, stingrays nudge the shore, manatees linger and dolphins are a common sight.

From the waterline deep into the mangroves, there are tires, deck chairs, wood planks, beer cans, plastic bottles, children’s toys, fishing line, shoes, crates, coolers, plastic drums and an endless array of urban debris that Biscayne Bay swallowed up and spat out.

Sitting 500 yards offshore, just south of the 79th Street Causeway, Bird Key is one of Biscayne Bay’s oldest and most ecologically important islands. It was surveyed by the British crown and fought over by early settlers. Investors acquired it, and preservationists covet it. Yet little has been written about the island. And litter has been accumulating there for decades.

Formed by the outflow of the Little River, Bird Key is one of only two natural islands in the bay north of the Rickenbacker Causeway. At least 20 other uninhabited islands were created from spoil material dredged from the bay bottom when navigation channels were dug in the early 1900s. Those manmade islands serve as habitats for plants and recreation areas for boaters, but have little permanent birdlife.

Bird Key is different. It teems with brown pelicans, ibises, cormorants, ospreys, egrets, herons and other large native birds. They soar overhead, wade in the water, hunt offshore, nest in the mangroves and enliven the island with their loud, primal voices.

A surveyor sent by King George III to the British province of East Florida marked the spot on his map of Biscayne Bay in 1770. He called it Bird Island, a name that affirms its historic importance as a rookery.

It’s an important marine habitat, too. Dredged material was added to it in the early 1900s, creating a 2.6-acre parcel to the north of the natural 3.7-acre island. A natural quarter-acre islet sits next to the sandbar connecting the two islands, and they are surrounded by 31 acres of submerged land that contains endangered sea grass important to fish, shrimp, lobsters, sea turtles and manatees.

While the bay’s unoccupied spoil islands are government-owned, Bird Key is in private hands, a status that has its own complicated history and consequences.

The story goes that a Californian named Thomas B. Valentine won a 13,000-acre Mexican ranch in a poker game shortly before the Mexican-American War. When the war ended in 1848, borders were redrawn, and Valentine’s land wound up in U.S. territory. After a protracted legal battle, his claim to it was upheld, but by that time hundreds of settlers had established themselves on the land. As compensation, the federal government issued Valentine a stack of certificates or “scrip” entitling him to 13,000 acres of unsurveyed public land anywhere in the country.

Valentine sold most of those certificates. Worth 40 acres each and entitling holders to take possession of land the government normally wouldn’t sell, Valentine Scrip became a hot commodity. Some of it fell into the hands of Augustus Smith, a Florida attorney and reported con man, who used it in 1915 to claim Bird Key.

The state didn’t want Smith to have it. Neither did a real estate speculator who had been eyeing it. A young man who had been homesteading on the island challenged him, too. But, after two years of legal squabbling, Smith became the first private owner of ancient Bird Key.

In true South Florida fashion, he flipped it six weeks later. Smith sold the island to Charles Deering, the wealthy industrialist whose lush tropical estate in South Miami-Dade is now a county-managed preserve. 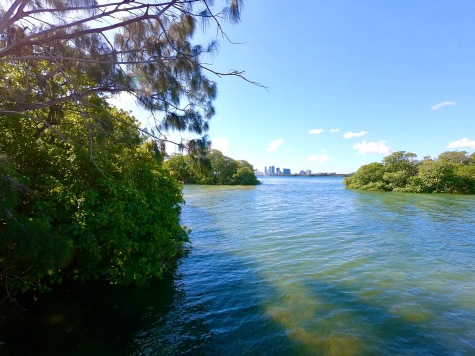 Bird Key with Downtown Miami in the distance. (Photo by Terence Cantarella)

“Deering probably simply wanted to preserve the island, either for some kind of future use or as a small aquatic and/or wildlife preserve,” says local historian Seth Bramson.

Bird Key remained in the Deering family until 1985, when it was purchased for $36,000 by two real-estate investors. One of them is Edward Easton, who describes himself as a silent partner. The other is Finlay Matheson, a grandson of William J. Matheson, the benefactor and namesake of Matheson Hammock Park, who owned much of Key Biscayne in the early 1900s.

“I just thought it was kind of fun to have an island in the middle of Biscayne Bay,” his grandson says.

“I think the highest and best use is to sell it to a developer who needs it for environmental mitigation,” he says.

Mitigation is the process by which developers are required to enhance or preserve a natural resource to compensate for resources they disturb elsewhere. Matheson envisions selling Bird Key to a developer who would turn around and donate it to the public.

“I think that’s the right thing to do with it,” he says. “We ought to preserve as much as we can.”

Without county protection and the benefit of organized cleanups, the island has become a magnet for trash. It blows into canals or washes into storm drains, then flushes into the bay and accumulates on the shores of Bird Key. Larger debris is dumped in the bay or breaks loose during storms.

Miami-Dade County collects about 125,000 pounds of trash annually from garbage cans placed on 12 of the spoil islands popular with boaters, a spokesman says, but there is no public funding for cleaning up private property. And, although littering, dumping and discharging pollutants are banned, there is no legal requirement for shoreline owners to pick up litter that floats onto their property.

Matheson says he wants to clean his island, but is hampered by the difficulty of mooring a big enough boat nearby to transport the trash. Besides, he says, a cleanup crew could spook nesting birds, and the trash serves the useful purpose of discouraging trespassers who would disturb the wildlife. 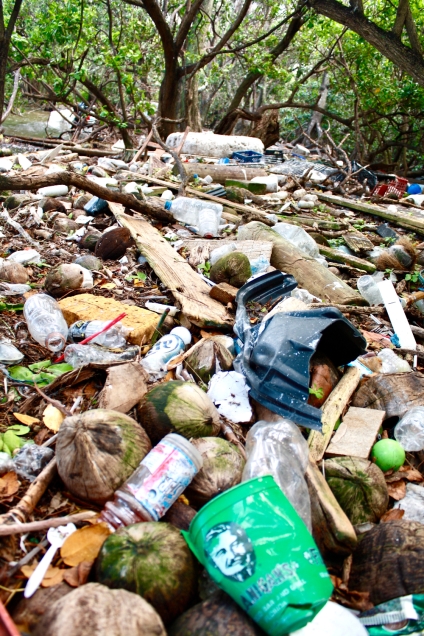 He has reached out to the Tropical Audubon Society for help, and Pamela Sweeny, who manages Biscayne Bay for the Florida Department of Environmental Protection, says the state plans to get involved, too.

“We are going to work with Tropical Audubon and the Florida Fish and Wildlife Conservation Commission to begin conducting regular bird surveys that will be followed by a cleanup of the island,” Sweeny says. “We agree and have said for some time that the island is horribly littered and a hazard to wildlife at this point.”

One man doesn’t want to wait.

Brian Fox noses his little boat into a shallow cove at Bird Key and trudges over the garbage to a clearing. “Even when I was a little kid, I can remember it always being at least this bad,” he says.

Fox, 28, is a biologist and recently departed executive director of Pelican Harbor Seabird Station, a nonprofit wildlife rehabilitation center off the 79th Street Causeway, half a mile from Bird Key. His mother, Wendy, was the director before him. She spent years rescuing injured birds from Bird Key. Fox often tagged along, and probably knows the island better than anyone. 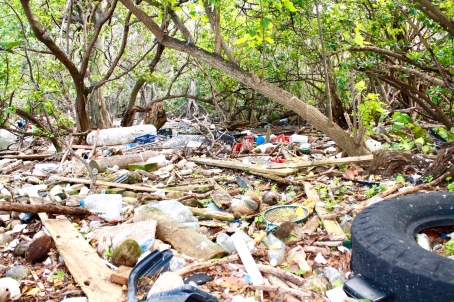 “It is common to see, on this island, seabirds that are entangled in fishing gear, fishing tackle, that become entangled in trees and are unable to move,” he says. “… Or they become entangled in debris while trying to forage for food within it or amongst the debris. So, it is a serious problem for seabirds.”

Solving it will take money. Fox says he needs about $1,000 to rent a pontoon boat and dumpsters and buy supplies. “We have people in place who are eager to assist with cleaning the island,” he says. “It’s just a matter of organizing the resources.”

Winter nesting activity may mean the cleanup will have to wait until the spring, but he’s determined to get the job done.

Fox points across the water to the city skyline.

“If all those people within sight of this island realized its ecological significance, I wonder how many more would get engaged in local conservation.”

He throws a sideways glance over the piles of trash and quietly adds, “I think about that a lot.”

Read this article in the Miami Herald (pdf).