Published in the August, 2012 issue of the Biscayne Times newspaper:

On a sweltering summer night in 1954, Frank Sinatra swaggers into a plush nightclub on Biscayne Boulevard. America is booming. Miami is its ritzy, neon-lit playground. And Sinatra has the world on a string.

He struts over to the bar, where his pals Dean Martin, Jackie Gleason, and Arthur Godfrey are drinking with tanned showgirls. He orders a Jack on the rocks, loosens his silk tie, and settles in to watch the stage show. Several drinks later, he’s onstage too, snapping his fingers and belting out his latest hits with the house band. It’s Miami in the Fabulous 50s and impromptu performances by Ol’ Blue Eyes are part of what gives the town its glamour.

Where those legendary performances took place, however, has been misreported and wrongly promoted in the decades since Sinatra and his cuff-linked crew left the scene.

For years, local lore, newspapers and magazines maintained that one of Sinatra’s favorite late-night hangouts was the Vagabond Motel at 7301 Biscayne Blvd. Still standing today, the Vagabond is considered the jewel of the Boulevard. With its glamorous, quirky Miami Modern (MiMo) style, the motel has been featured in books, received a historic designation by the City of Miami, and has been nominated for awards by the American Institute of Architects. 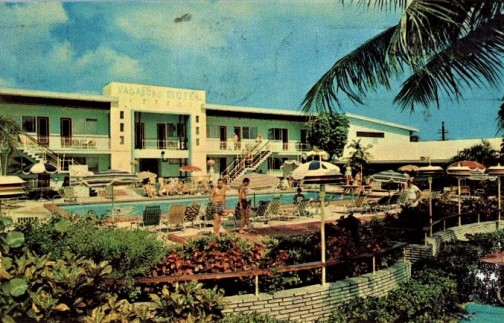 The Vagabond was designed by one of the top architects of his time in the Miami area, Barnet Robert Swartburg (who also designed the Delano Hotel on Miami Beach). Built in 1953, the whimsical, tropical feel of the Vagabond was meant to lure in vacationing families as they drove into town looking for a fun place to stay. Like other flashy motels on the Boulevard, the Vagabond had a pool, restaurant and cocktail lounge.

It’s in that lounge that Sinatra is said to have spent many a wild night.

Eric Silverman, the Vagabond’s last owner, often touted the motel’s supposed star-studded past. “This place was a retreat for guys like Sinatra, away from the spotlight of Miami Beach,” he told the BT in 2008. “It’s not like there was an announcement that he was here. He’d come to hang out at the bar and maybe get up and do a number. It was more of a private thing.”

Silverman, who planned to restore the now-derelict Vagabond, ran out of money and abandoned the place in 2010. At his office in the motel, he had a collection of photos purportedly showing celebrities Jackie Gleason and Arthur Godfrey performing together on the motel’s stage in the 50’s.

Local newspapers promoted the legend, too. In 2006, the Sunpost stated that the “Vagabond is said to have attracted popular performers of the time, such as Frank Sinatra.” In 2007, the Herald said the motel “is rumored to have once been the spot where Sinatra and friends hobnobbed with showgirls.” That same year, the Atlantic Monthly claimed that “In its heyday, the Vagabond had a raffish, Rat Pack charm” and that Jackie Gleason and Dean Martin performed in its bar.

Sadly, those tales are all fiction.

While Sinatra and his friends did indeed imbibe on Biscayne Blvd., they didn’t do it at the Vagabond Motel.

Prominent local historian Seth Bramson says there’s no documentation to support the illustrious claims. “I doubt very seriously that Sinatra, Gleason or anybody else hung out at the motel. There would’ve been no reason for them to.”

Antolin Carbonell is a historian and retired architect who leads walking tours on Biscayne Blvd. which start at the Vagabond Motel. He doesn’t believe the stories either: “I have lived within walking distance of the Vagabond Motel since 1963. It was just one of the best of a series of middle-class motels that competed for clients on price and location. It was never a glamorous destination.”

Miami attorney Michael Tarre knows for a fact the stories are false. He’s the nephew of Sidney Goldberg, who built the Vagabond. Tarre spent much of his youth around the motel in the 50’s and 60’s and even worked as lifeguard at the Vagabond’s pool as a teenager. His father was one of the investors. “I can assure you,” he says, “Frank Sinatra never showed up at the motel. There was no place to perform.” 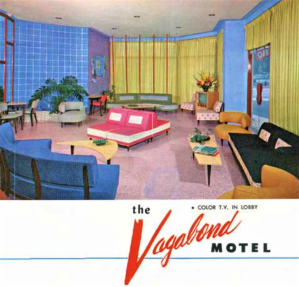 The Vagabond’s in-house restaurant, he says, was really just a small coffee shop that sat no more than 12 people. Guests stopped in for breakfast and lunch, but usually dined elsewhere on the Boulevard at night. The adjacent cocktail lounge was so small “you could barely fit a case of Budweiser in there.” And there was certainly no stage.

The Vagabond’s floor plans from 1953, on file with the City of Miami Building Department, reflect those descriptions. They show a roughly 900 sq. ft. coffee shop and tiny 300 sq. ft. bar/lounge. Much too small for any kind of entertainment.

How, then, did a casual, middle-class family motel hijack history? And, where did Sinatra and his pals really carouse after hours when they ventured across the causeway from Miami Beach?

The answer lies in a downtown parking lot.

Two years before the Vagabond Motel went up on the Upper East Side, another place with a similar name – the Vagabonds’ Club – opened its doors at 732 Biscayne Blvd., a block north of the Freedom Tower. A 300-seat supper club with a lounge, stage, and full kitchen, the Vagabonds’ Club was named after its owners, a comedy quartet called ‘The Vagabonds.’ The Vagabonds achieved stardom in the early 50’s after appearing on the popular TV show ‘Arthur Godfrey and Friends.’ Their club quickly became one of the hottest spots in town. 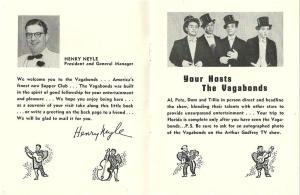 Sam Younghans was a friend of The Vagabonds and regularly hung out at the club in the 50’s. “Many celebs came to the club,” he says. “It was a very popular place in its time. The last act to perform there before they shut it down was Tony Bennett. They sold out every night. I was their stage manager for that show.”

95-year-old Shorecrest resident Ann Carlton performed there briefly with her late husband. She sang and played accordion. He sang and played violin. “A lot of people from showbiz like Jackie Gleason came in there,” she says. “Frank Sinatra. Victor Borge. They’d sometimes come in and perform free for The Vagabonds because they wanted them to be successful. It was really a wonderful place.” 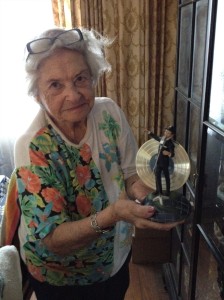 Confusingly, Carlton says she performed at the motel, not the club. Her descriptions, however, clearly point to the downtown club. A documentary about the era entitled, ‘Miami Beach: Fabulous 50’s,’ shows a brief clip of the stuccoed, neon-lit club that fits her descriptions, too.

That same kind of confusion led to a lawsuit half a century ago. “The Vagabonds sued us for using the name,” says Michael Tarre about his family’s former motel. “But the name Vagabond isn’t trademarked. In the end, we entered into an agreement saying the motel won’t go into the nightclub business and the nightclub won’t go into the motel business.”

The band eventually sold the club in 1956. It operated as a strip club with the same name until the City Commission revoked its license in 1960. It’s not clear when the building was demolished but the site is now an asphalt parking lot.

A casual researcher today might still confuse the two Vagabonds, as did former motel-owner Eric Silverman whose celebrity photos (downloaded from the internet) were clearly taken at the downtown club, not the motel. Miami’s dearth of historical records and a relatively young preservation movement make researching the past even more of a challenge.

But, while the Vagabond Club has fallen to the wrecking ball, the boarded-up Vagabond Motel now has another shot at glory. Developer Avra Jain recently signed a contract to buy the place. She hopes to restore it to its mid-century splendor and attract well-heeled guests.

That prospect makes former Vagabond lifeguard Michael Tarre happy: “I’m glad to see Uncle Sid’s dream project revived.” Uncle Sid, he says, was a pharmacist and liquor store owner from Chicago who managed to get his dream motel designed by one of Miami’s greatest architects.

That motel has survived Miami’s ritzy decades and sleazy ones; has hosted families and prostitutes; has witnessed festivities and murders; has been dressed up and boarded up. It’s now recognized as an architectural masterpiece worthy of a multi-million dollar renovation.