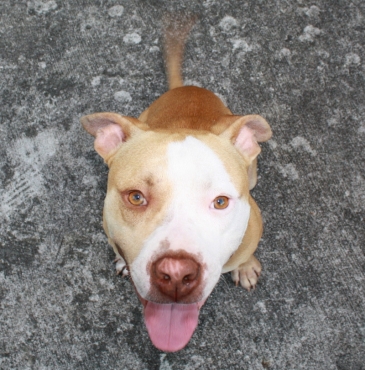 Bailey was a fighting dog. A pit bull. But when he crawled out from under a parked car in Little Haiti last year, he didn’t look very tough. He looked like he’d had enough.

Bailey was about two years old. He kept his head low to the ground when he walked. He had big, brown bloodshot eyes, three missing claws, a half dozen bite marks, and an ugly collection of red scars. I could count his ribs.

I only knew one thing about pit bulls: they were dangerous. But Bailey seemed desperate. So I put out food and water and sat on my porch steps to watch him eat. He scarfed the meal up into his powerful jaws, then came over, licked me up to my elbows, and fell asleep with his big head on my feet.

I named him Bailey because he was the color of Irish Cream. But I knew I couldn’t keep him. My wife and I had babies on the way. Twins.

Besides, in Miami-Dade County, pit bulls are illegal. Bailey wasn’t just a dog. He was an outlaw.

So I knowingly harbored a fugitive. In the daytime, we laid low. We didn’t go to the park. We didn’t swim at the beach. We didn’t even hang out in the front yard. We just played soccer in the backyard with coconuts that fell from trees. We ventured out only at night — after the code enforcement officers had gone home.

Bailey’s wounds healed and he put on weight. I got him fixed by a Miami vet who promised not to rat us out.

It didn’t make the slightest difference in his behavior. Bailey was crazy — in all the usual crazy-dog ways.

He chewed the crawl-space covers off the side of the house. He shredded his doggy bed, dug holes almost down to the Biscayne Aquifer and made my outdoor furniture look like firewood. He terrorized the neighbor’s dog through the fence.

I couldn’t let him in the house. And whenever I went to the backyard, Bailey would jump up, wrap his dirty front paws around my waist, and press his cheek against my stomach. If I left the house, he had a total meltdown, crying and barking — driving the neighbors crazy.

I put up fliers in gay and rich neighborhoods, hoping to find Bailey a sugar daddy with no kids, a big heart, and lots of patience. No one called. I sent emails to pit bull rescue groups. They all said they were full. I even made Bailey a Facebook page. There were no takers.

I put an ad on Craigslist. Linda responded first. She wrote about her huge yard and veterinary experience. I googled her email address and discovered that Linda is a dog-flipper. She apparently gets dogs for free then sells them for a profit.

Max wanted Bailey, too. Google turned up a MySpace page showing Max posing in front of a jacked-up car with two snarling pit bulls on chains.

Charles, in Vegas, wanted me to send Bailey over on a plane. I checked out his address on Google Earth. The house looked like a bomb had gone off in it.

Bailey, meanwhile, had learned to climb the Banyan tree in the backyard, chasing the neighborhood chickens into the branches. He was a hyper dog. But when I told him to sit, he would at least try. That was all he really wanted — to be with me.

But, after 6 months, time finally ran out for Bailey and me. My twins were almost here. My wife didn’t want to give him up either. But we both knew he had to go.

I handed Bailey off to the girl at the intake desk. He followed her with his tail wagging and head held high. The day before, he had chewed open a can of blue paint. He looked back at me — his face like a character from Avatar — certain that I would follow.

The Broward Humane Society is clean and well-run. They only put animals to sleep if they’re ill or aggressive. Bailey was both. The vet who fixed him told me he had a bad case of heartworm. And, even though Bailey loved humans, he hated other dogs. It was just a matter of time before the shelter found out. I knew they would put him to sleep.

A friend of mine said it was the best thing. I wasn’t sure he was right, but I had run out of options.

My wife cried. She said, “He was crazy, but he was sweet.”

That night, I couldn’t sleep. I thought about how my twins would be here any day. But I kept seeing Bailey’s blue face and brown eyes disappearing through the swinging doors of the shelter.

In the morning, I went to the shelter’s website and saw a picture of Bailey. He looked confused.

I grabbed my keys and jumped in the car. I wanted my dog back.

There I was, jogging along the rows of kennels, scrambling to find Bailey, feeling like Sally Fields in the movie Not Without my Daughter. In my head, I had built him the doghouse where he could stay — away from the twins. But as I moved from aisle to aisle and room to room, I couldn’t find Bailey.

I was too late.

Suddenly, I heard him. Bailey knew I was there. He started barking — that same powerful bark that had angered the neighbors. I followed his calls and, when he finally saw me, he leapt up onto the chain link and cried so hard he peed himself.

His tail whipped back and forth and his whole body shook.

I rushed to the front office. The woman there told me I had to officially adopt Bailey. I handed her my license to begin the paperwork.

She looked at my license, hesitated, and handed it back. “I’m sorry,” she said. “We can’t place pit bulls with Miami residents. It’s illegal.”

She looked at me with sad eyes.

I tried to negotiate. In Miami, rules are flexible. Everything can be worked out. “Can’t we just do it, you know, off the books?” I asked.

She shook her head. This was Broward.

I told her that Bailey trusted me, and I would feel guilty forever.

She hesitated, then offered this: “If you have a friend with a Broward address, they can adopt Bailey.”

I was ecstatic. I called a friend in Fort Lauderdale. He agreed to help. Ten minutes later, he called back. He changed his mind. He was my only Broward friend.

For a little while after that, I couldn’t bring myself to check the Humane Society’s website. When I finally did, Bailey’s picture had disappeared.

I realize now that Bailey wasn’t the only one looking to be rescued. He from his past. Me from my future: Could I really be father?

I’ve replaced the crawl-space covers on my house. I fixed the outdoor furniture. The twins arrived strong and healthy. In a few years, they’ll want a dog. I’ll probably get them a mid-size breed with a clean history and calm temperament.

One that will love them the way Bailey loved me.

To see the story as it appeared on WLRN.org, click here (pdf).