Published in the July, 2011 issue of the Biscayne Times newspaper: 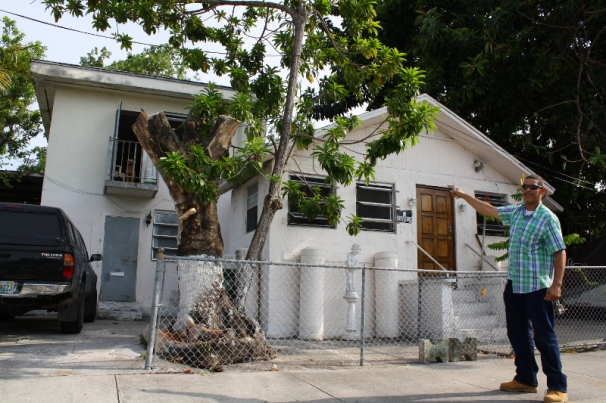 When Rene Martinez opens the front door of his house, he sees nothing but cars. From the back door, it’s the same view. In fact, no matter which window or door he looks out of, the scenery is the same. That’s because his home sits in the middle of a 200-car parking lot.

Straddling the border between Little Haiti and Buena Vista, Martinez’s house was once part of a subdivision that included nearly 100 homes and stretched from N. Miami Avenue to NE 2nd Avenue, and from NE 50th Terrace to NE 53rd Street. The neighborhood was middle-class Anglo for most of the last century, then shifted demographics in the 1970s and 1980s, when thousands of refugees from Haiti and Cuba arrived. And while the neighborhood is still distinctly Caribbean, Martinez’s block looks more like an asphalt sandbar, with his house sitting alone in the parking lot like a two-story metaphor for the passage of time.

Over the course of the past 30 years, his former neighbors sold their homes to the nearby Jewish Home and Hospital for the Aged (recently renamed Miami Jewish Health Systems). In the 1950s, MJHS was just a collection of wooden bungalows on the former estate of prominent Miami merchant E.B. Douglas. But the organization outgrew its 17-acre campus toward the end of the last century as Miami’s large post-war Jewish community began to age and seek medical care. “The Home,” as it’s still known, expanded south and westward into Martinez’s neighborhood.

“They were hungry,” Martinez says of his vanished neighbors. “It was a poor neighborhood. They jumped on the first deal they got.” But his father, who bought the property in the early 1970s, refused to sell. His affection for his house and a belief that he could hold out for a better deal motivated him to hang on until the end. When he died last year at the age of 81, he left the house to his son, now 45 years old, who shares his father’s sentiments for the home.

The tall mango trees in the backyard grew from seeds his father carried in his pocket from Cuba. The roosters and chickens that patrol the area are the offspring of fowl that Martinez Sr. raised himself. And the home’s second story, an addition to the original 70-year-old structure, is the handiwork of the father-son team.

Martinez still refers to his long-gone neighbors by their full names when speaking about them. He tells tales of murders, hauntings, affairs, and of schoolboy pranks that he and his friends regularly played on the residents. To give up his childhood home, he says, “They’d have to pay me one million dollars. Maybe $1.5 million.”

Valued at just $258,000 by the Dade County Property Appraiser, his asking price seems extravagant, especially since the prospect of finding a buyer willing to live amid a crush of cars and trucks seems unlikely. However, Martinez explains that he has four sisters — all of whom share a stake in the property — and a million dollars split five ways doesn’t amount to a fortune. 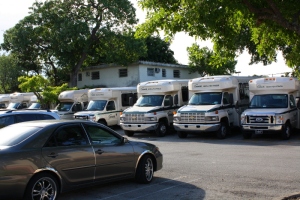 He also points out that the access road leading to his house is maintained solely for his benefit and divides MJHS’s parking area into two separate, unconnected lots. If he leaves, MJHS can close it off and gain a new rear access to the facility, or add roughly 70 new parking spaces — that’s in addition to some 30 spaces his house occupies.

Will they pay the princely sum?

MJHS’s chief development and marketing officer, Blaise Mercadante, says that his organization needs more parking and would love to buy Martinez’s property. But, he explains, “We are a not-for-profit and we operate on donations. We need to be good stewards of the donations we receive, which includes paying reasonable rates for all we purchase.”

The plan, he says, is simply to wait out Martinez: “We don’t want to be bullies. There are no plans to ask the government for eminent domain.”

Eminent domain, while typically used by governments to seize land for public projects such as highways, railroads, and airports, can sometimes be enacted on behalf of private entities. If a company can convince a majority of the state legislature that removing a homeowner is in the public interest, a plea might be successful. In this case, since MJHS is a large medical facility, it could conceivably argue that Martinez’s presence hinders access, parking, expansion, and complicates important zoning processes.

Determining that future value involves a measure of speculation based on price per square foot, the value of added parking spaces (and any revenue collected from them), new facilities, jobs created by expansion, and a variety of other factors. It’s possible, therefore, that the state could determine that the value of Martinez’s property is considerably higher than its current market value.

Martinez, meanwhile, is digging in. He recently planted a row of young lychee trees in the narrow strip of soil beside his house, the fruit from which he plans to enjoy ten years from now. A building contractor by trade, he has plans for the house, too: “I’m going to do renovations soon, paint the house, get it in good shape and let everyone know I’m here to stay.”

Martinez is no anomaly. The Internet abounds with stories of people who refuse to sell their homes and end up living in parking lots, shopping malls, under highway overpasses, or sandwiched in between skyscrapers. In China, homes like Martinez’s are called “nail houses” because their owners are like stubborn nails stuck in a piece of wood.

Literature and film, meanwhile, regularly sympathize with such tenacity, as in the 2009 Disney/Pixar movie Up or the classic 1942 book The Little House, which is still in print today.

But while those stories often involve a David vs. Goliath storyline, Martinez faces a less sinister foe. Real estate records show that MJHS paid fair-market prices for many of the most recently purchased homes in the area. As one of the nation’s preeminent geriatric care facilities, the organization is often bequeathed small fortunes by happy patients and their grateful relatives. Those gifts, along with government grants, have fueled its growth and made the acquisition of private homes possible.

Whatever the future holds, Martinez is content living in the house where he grew up. “I really don’t care about money,” he says. “Money to me means problems. It’s a way to live a little better. You can get things you need, but it’s not everything.”

Still, he’d move on if he could trade up — perhaps to a beach house in Central or South America. Otherwise, he says, “I’d rather die here than go somewhere else. In fact, maybe that’s what I’ll do.”