Published in the June, 2010 issue of the Biscayne Times newspaper:

On the quiet Oleta River in North Miami Beach, where tall mangrove forests grow along the ancient shorelines and block out the noise of the city beyond, a nine-person crew sits in a long, hand-painted boat, waiting for an order. Bent forward, arms poised at the ready, their fists clench long wooden paddles. A steersman, standing at the stern, grips the skiff’s rudder by the handle and issues his command: “Go!”

The crew lets loose, plunging their paddles into the murky water, using the strength of their upper bodies to push their 40-foot Chinese dragon boat upriver. The vessel glides along at an impressive speed, each paddler pummeling the water in sync until, 250 meters along, the steersman calls for an intermission. “Let it ride!” he yells.

The paddles come up, the paddlers catch their breath, and peace returns to the winding waterway — until they repeat the drill moments later.

Every weekend the scene plays out the same way. The Puff Dragon Boat Racing Team (Puff, for short) races their dragon up and down the placid Oleta until — as they like to say — they’ve drained their tanks.

That an ancient Chinese sport should find a home on an urban river in North Miami Beach may seem strange to some, but to 27-year-old Biscayne Park resident Sam Trotter, it makes perfect sense: “South Florida, being outside on the water, meeting people and getting exercise — that to me is a no-brainer.”

Trotter and wife Kate Benson joined Puff just two months ago, but like many newbies, they’ve quickly become diehard dragon-boaters. And even though a competitive streak runs through the heart of the team, Benson insists the niche sport is as much a social affair as it is a sports bout: “There’s a lot of camaraderie. And it’s still kind of underground, so you feel like you’re part of a club. Besides, what other team sport can you do where you get to be out on the water? This is Miami. Don’t you want to be out on the water?”

Founded seven years ago by Michael Chen, Puff is one of about five dragon-boat racing teams in Miami-Dade County and currently boasts some 50 permanent members, ranging from buff, young outdoor enthusiasts to well-ripened weekend warriors (including a 73-year-old part-time paddler). Some members show up to the weekly training runs religiously. Others, only occasionally.

As a young man in Hong Kong, watching dragon-boat races from the window of his home, Chen was never too impressed with the sport. “Too damn slow,” he thought. It wasn’t until many years later, living in South Florida and looking for a way to get outdoors and reconnect with his cultural heritage, that he decided to take up dragon-boating. That’s when he realized just how satisfying — and fast — racing dragons can be. “You don’t realize how fast it is until you’re in the boat,” he says. 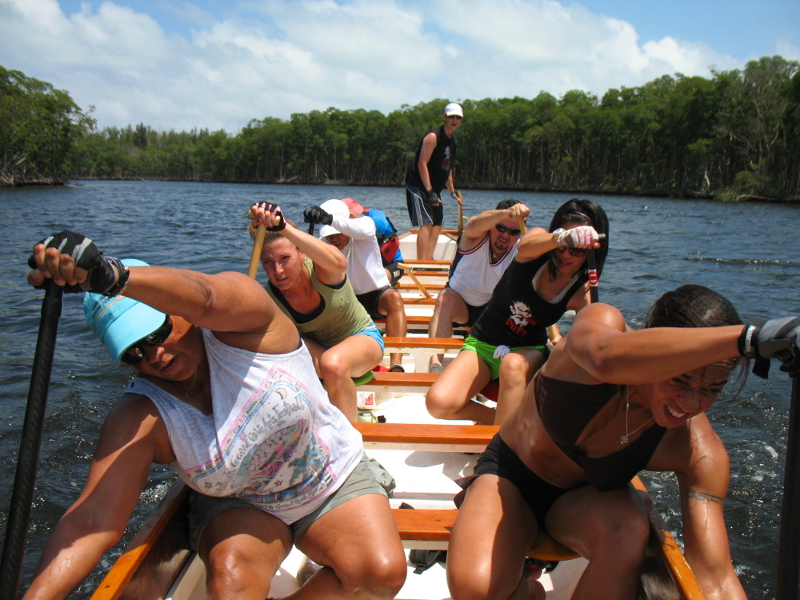 The Puff crew digs into the Oleta River.

Chen participates in local races twice a year. He competed in Tampa last month, raced in New York last August, and travels to Hong Kong every year for an annual dragon-boat festival there (seven Puff members will accompany him this summer). The sport has even shaped his world view. “Putting a bunch of people in a boat and having them work together toward the same goal,” he contends, “makes the world a better place. If you want world peace, everyone should go dragon-boating.”

Dragon-boating, in fact, may be the biggest sport you’ve never heard of. In 2006 Time magazine reported that “more than 75 dragon-boat festivals were held in 31 states and 70 cities across the country, with participation up 20 percent over 2004, to 54,000 people.” More recent surveys show considerable increases in those numbers, and the sport has been called one of the fastest-growing water sports in the world, with annual festivals being held in more than 50 countries.

Begun in China, dragon-boating arose more than 2000 years ago as a way to appease mystical river dragons who had sovereignty over water, rainfall, and floods. Tied in to that yearly custom is the legend of Qu Yuan, a patriotic poet who drowned himself in a river after the defeat of his homeland by a rival army. The dramatic bard’s suicide fell on the day of the annual dragon-boat festival and villagers are said to have raced out in their dragon boats to look for him, tossing rice dumplings into the river to distract fish from eating his body.

The exotic world of myth and legend has morphed into a competitive international sport complete with standardized rules and equipment. Typically, 20 paddlers seated in pairs power a boat, although upward of 50 are common. A steersman controls the rudder and a drummer sits at the bow, beating out a rhythm for the paddlers. Red, green, or blue scales adorn the sides, and a colorful dragon head and tail are fitted to either end of the boat for races.

A distinctly festive attitude, however, prevails. In China yearly dragon-boat festivals are vivacious affairs where alcohol flows, food is abundant, and paddlers are known to party late into the night. In Miami, too, the annual dragon-boat regatta, which pits paddling teams, corporate workforces, police, firefighters, and other local groups against each other, often feels like an oversize, Asian-themed block party.

The boats feature a dragon head at the bow and a tail at the stern. (Photo courtesy of Puff)

True to that spirit, Puff (named for a certain “Magic” dragon, but also an acronym for Paddles Up For Friendship/Fun) ended their recent Oleta River practice at the historic Blue Marlin Fish House, on the river near the team’s launch site. Seated around a table in the shade, five Puffers raised beers to toast their enlivening workout: “To dragon-boating!”

Balu Vandor, a lithe Hungarian who’s been hitting the paddles for five years, breaks down the formula for good dragon-boating in between swills of lager: “It’s 49 percent technique, 51 percent timing.” The sport’s collaborative nature, he says, means that some people’s personalities just don’t work in dragon-boating.

Conversely, photographer Kate Benson says that Puff has spawned more than a few long-term relationships — and even one marriage: “You didn’t know dragon-boating was so romantic, did you?”

“But first and foremost,” founder Michael Chen insists, “we’re competitive. We want to win.” He says Puff has two races coming up in the next six months, and some members will try out for Team USA, which will represent the U.S. in the World Dragon Boat Championships in Tampa next year.

Chen, however, is no party-pooper. “A lot of people in Miami say they like to party,” he says, “but we have more parties in one month than they have all year.” He believes Miami has the potential to be a world destination for dragon-boaters because of the weather and water. And the inclusive nature of his team ensures the advancement toward that goal: “We want new members, we embrace all people, we’re apolitical, and we respect that everybody is a unique being.”