Published in the March 5th, 2010 issue of The Lead newspaper: 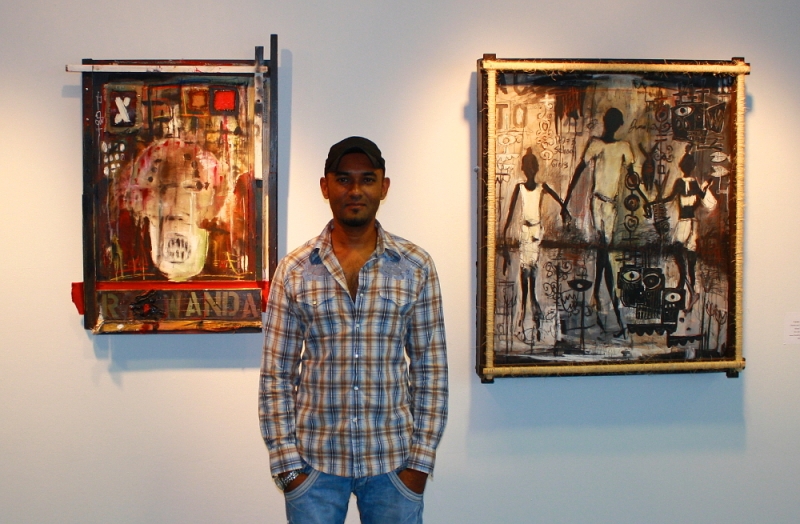 Artist Franklin Sinanan delivered six paintings and one sculpture to Miami Beach City Hall early last month. His work was put on display there as part of a Black History Month art exhibit.

Since dropping off his artwork, however, Sinanan has revisited City Hall twice to remove pieces the city later decided were inappropriate.

Born in Trinidad and raised in Canada, Sinanan’s work has taken on a distinct Afro-Caribbean flair since moving to Miami two years ago. “In Canada,” he says, “my work never looked like this. It was just a lot of white faces.”

Now, some people are afraid to step into his Lincoln Road studio because of the voodoo-like elements in his work. He’s been called a witch doctor. Some visitors ask to be healed. One woman wanted his blessing to help help her land a large sum of money.

City officials, who initially approved the exhibition of Sinanan’s work in their fourth-floor public gallery at 1700 Convention Center Drive, later asked him to remove a sculpture entitled “Rituals” after receiving complaints from city staff.

With votive candles, feathers, rope, baby dolls and skull-like heads atop crucifixes, Sinanan admits the sculpture looks “voodoo-ish.” Yet, he puzzles over why it needed to be removed. “This is Miami. It’s part of the local culture, right? Why should anyone take offense?”

Three days after installing it, however, he complied with the city’s request, and replaced it with a less controversial piece: an abstract painting entitled “Rwanda.”

A few days later, however, he got another call from the city. His painting of a rooster, they decided, also needed to go. The crucifix dangling from one corner of the canvas and the votive candles that lined a bottom shelf, Sinanan suspects, were to blame. “Still,” the artist says, perplexed by the back and forth, “it’s just a chicken.”

City of Miami Beach officials, who refused to comment for this story, clearly disagree.

Although, generally, municipalities cannot display religious symbolism on public property, Florida International University Constitutional Law Professor José Vilanova says there are exceptions: “Any works of expression that are fully artistic in nature are covered under the ‘Free Exercise’ clause of the First Amendment. So, the government can display religious symbolism if there’s an expressly secular purpose, like an art exhibit. Where municipalities run into problems is when they financially sponsor some form of overt religious expression, like a manger scene during Christmas.”

However, “In Sinanan’s case,” Vilanova says, “City Hall is the gallerist, if you will. And, in that regard, they can put up and remove whatever they want. Now, if they were to craft some kind of policy, written or unwritten, forbidding the display of artwork that portrays religious imagery, it would be a First Amendment problem.”

Miami Beach’s City Charter makes no mention of religious symbolism on public property, artistic or otherwise. Whether an unwritten policy exists is unclear.

But, Constitutional law aside, city employees are not alone in their disapproval of Sinanan’s art. Last December, an important sponsor pulled funding from an Art Basel satellite exhibition featuring the artist’s work.

Babacar M’bow, curator and director of Multitudes Gallery in Miami, says of the reluctant patron: “He was my biggest sponsor. He represented three quarters of my budget. He came to me and said, ‘This is voodoo.’ But I had to take an ethical position. I told him to keep his money and we presented the show with Franklin’s work anyway. Unfortunately, it demonstrates how in South Florida we need to do more to teach people about art. Our society is becoming more and more multicultural and I think Franklin Sinanan is a symbol of where we should be going.”

A year earlier, at the Art Center of South Florida art studio complex on Lincoln Road where Sinanan is an artist-in-residence, his work was the target of more animosity. A police report from Jan. 26, 2009 details the odd behavior of 48-year-old Robert Newton, who strolled up to the center’s large display windows where Sinanan’s rooster painting was on exhibit, and scrawled the word ‘Santeria’ across the glass with lip gloss. A security guard summoned police and Newton was promptly arrested. He told cops the painting was offensive.

“I’m Canadian,” Sinanan says, “I don’t know anything about Santeria or Voodoo. “I was born in Trinidad, but I wasn’t brought up there, so all this is new for me. I don’t even know if they practice voodoo in Trinidad. Miami influenced me to create these pieces without really knowing what I was doing. I just see it as art. But people keep telling me it’s voodoo or black magic. But I just pulled this stuff out of my head. It’s all imagination.”

“I don’t create work to be provocative,” Sinanan insists. “Besides, the inspiration for my rooster painting wasn’t voodoo. It was Mr. Clucky.”

Read this article in The Lead newspaper (pdf).